The “Batch of ’01” of Zahira College Colombo (hereafter referred to as Batch), an affiliated member of the Zahira College Old Boys Association, hosted its traditional annual Ifthar on Friday, 23rd of April 2021 at the Marine Grand Banquet Hall in Colombo exclusively for its members. This was the 4th “Ifthar” carried out by our batch as we were unable to host last year due to the ongoing pandemic. “Ifthar” is one of many programs that the batch embarked on in harnessing and promoting fellowship among its batch mates.

After renewed hopes and aspirations, we engaged in pursuing this year’s Ifthar with much dedication and enthusiasm in which our brothers were seen engaged tirelessly and taking every effort in making this event memorable.

The host for the evening was Afraz Haniffa who graced the members with his unique style of presentation by delivering the keynote speech. The event followed with Qirath, recited by our brother and Moulavi, Azad, and followed by few words by our President, Hazeem Kitchilan.  Overwhelmed by the attendance, the President was full of praise to the Organization Committee who pulled it off against all odds and urged his fellows to show unity, solidarity, and dedication to Alma matters in our batch’s future endeavors. With such remarks, Moulavi Azad continued in devoting his time to deliver a sermon in the context of Ramadhan.

The event was live telecasted in Facebook exclusively to members via its Facebook Group with the intention to its overseas members to have a glimpse of the entire moments.

A special Quran Thamam chain was recited before the event in dedication to our late brothers namely: Mohammed Fazal, Zahran Zuhar, Ashad Rizvi, Mohammed Noorullah, and Mohammed Imthiyaz who passed his last breath a few days before the event. The significance of this recital chain was the passionate participation by our fellow brothers to complete the recital of the pledged chapters of the Quran in remembrance of the deceased. With such devoted acts by our brothers, we were able to complete recitals of all the chapters in the Quran and astonishingly, we were able to take it to another round as well.

The event was concluded after the thanking note was delivered by the host Afraz, himself. In his speech, he thanked all the members, the Organizing Committee, and batch mates ranging from here to far outreach corners of the world who provided their unconditional support in making this event a success. With such appreciation, he went on to thank the participants who took time off their busy schedules by attending this event thus making it a memorable one in our batch’s history. 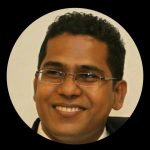 A Proud Zahirian; A Member of the Class of ‘01; An IT professional and a voluntary blogger.